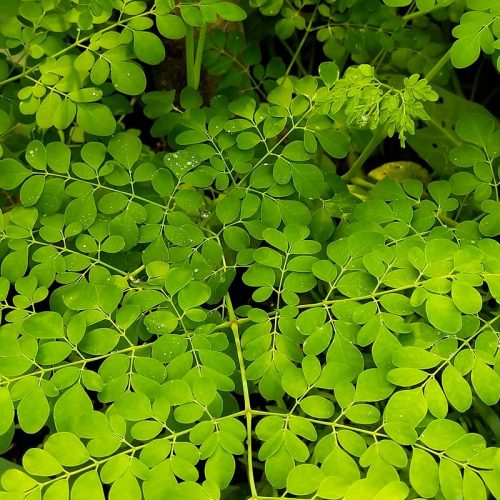 Moringa Oleifera is a plant belonging to the Moringaceae family and is widespread mainly in Africa and India.
In the cosmetic field, both Moringa Oleifera leaves and seed’s extracts are used.
From the seeds an oil rich in:

Active components such as thioglycosides (niazimycin, niazirine), isothiocyanates (2) have been identified in the seeds. The seeds, thanks to the content of isothiocyanates, and aromatic glucosinolates possess a powerful antibacterial activity which manifests itself especially in the inhibition of bacteria involved in acne and dandruff (7).

An extract rich in flavonoids with an antioxidant effect and other polyphenols such as gallic acid, chlorogenic acid, ferulic acid, kaemferol and quercetin with an antioxidant effect is obtained from the leaves. The leaves also have revitalizing, anti-inflammatory, healing, hypolipidemic, antimicrobial, UV protection, skin sebum reduction, moisturizing properties (8).

What are the specific uses in dermocosmetics?

Moringa Oleifera’ leaves protect the skin from oxidative phenomena and prevent the attack of free radicals and therefore damage to DNA (5). Exposure to UV and environmental pollutants (fine dust, volatile organic compounds, heavy metals) is the main cause of oxidative stress in the skin and is an important risk factor for the development of skin problems, for example the formation of wrinkles, impairment of barrier function, injury and cancer. Following exposure, the reactive oxygen species (ROS) that are formed exert a damaging effect on cellular fractions, including cell walls, lipid membranes, mitochondria, nucleus and DNA, producing ‘oxidative stress’.

Moringa oleifera has shown purifying properties against skin imperfections (atopic dermatitis and acneic skin). Both the leaves and the seeds have an antibacterial and antimicrobial effect, particularly inhibiting the growth of Pseudomonas Aeruginosa and Staphylococcus aureus. In particular, niazimycin and isothiocyanate are the components derived from the seeds of moringa that show in vitro antimicrobial activity, necessary to improve the imperfections of an acneic skin.

Moringa contains high percentages of proteins, amino acids, sterols, oligosaccharides and polysaccharides which have both direct moisturizing activity being hydrophilic molecules that retain water, and indirectly through the formation of a film on the skin surface which avoids the loss of water from the epidermis.

Moringa oleifera, originally from the Indian and African subcontinent, is a concentrate of vitality and nourishment for the skin. The plant is rich in proteins, vitamins, mineral salts, beta-carotene but also in polyphonols (flavonoids, phenolic acids) and phytosterols with antioxidant effects. The precious substances obtained from the leaves and seeds, in addition to inhibiting the activity of free radicals, help purify skin imperfections and oxidative damage, moisturize and nourish the skin in depth (9-10).